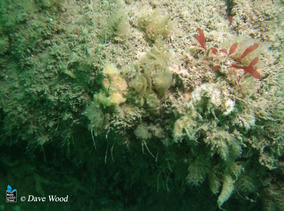 Bugula plumosa is an encrusting bryozoan, prevalent in the southern part of the British Isles. The colonies are composed of several tall feathery fan-like tufts, arranged spirally around the central stem, to resemble small Christmas trees. Colonies can grow up to 8 cm in height and appear a buffish-orange colour.

The species is typically found hanging in caves, and below boulders on the shore. It is also common on pier pilings and harbour installations. In deep waters, B. plumosa has been dredged from stones and shells. The species ranges from the intertidal zone to about 50 m and is often found in areas of considerable turbidity and sand-scour.